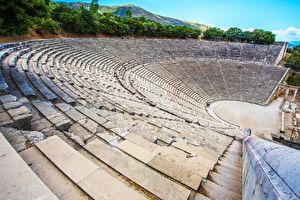 Everyone has heard of some of the ancient Greek playwrights, like Aristophanes and Sophocles, but did you know that you can still see some of their works performed in actual open-air theaters dating back to the 4th century BC? In Epidaurus, near Nafplio, you can visit two of these remarkable venues: The larger Ancient Theater of Epidaurus which holds up to 14,000 spectators, and the smaller Little Theater of Ancient Epidaurus with its capacity of 2,000.

Imagine taking your seat to watch a modern day version of plays that have been performed throughout the world for over two thousand years in the place where they were originally presented! Not only that, but each play will give you an insight into what life may have been like all those years ago, and how little has changed in some ways. The legendary acoustics at Ancient Epidaurus are a result of its perfect geometrical design – you can really hear the proverbial pin drop there. This is where great works by Aeschylus, Euripides, Sophocles and Aristophanes can still be seen today.

Life was either a comedy or a tragedy according to these ancient Greek playwrights and fantastic plots, extravagant costumes and lewdness were all part of the fun in the former. Criticism of the politicians and those in power was normal and that concept of "satire" is still a very popular comedic expression today. Tragedies were inspired by stories from mythology and dealt with serious issues, moral dilemmas and human nature. Who hasn't heard of or been touched by fictional characters of the era like the ill-fated Oedipus, the doomed Antigone or the betrayed Medea?

Since 1955, the Epidaurus Festival has been treating audiences to well-known theatrical performances during the summer months and many international stars have taken part in the productions. Maria Callas herself starred in Medea in 1961 and Kevin Spacey took the role of Shakespeare’s Richard III in 2011. So, if you are looking for a cultural trip this summer full of history and great performances at a UNESCO World Heritage site, then a visit to Epidaurus is a must!

We will be happy to give our guests all the information they need for an unforgettable visit to Epidaurus – please feel free to contact us at any time!