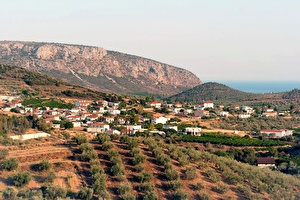 Each village in Greece has its own story to tell and its own unique traditions. The tiny village of Pyrgiotika (also Pirgiotika), is no exception. The home of Perivoli Country Hotel & Retreat, this village takes its name from another village in Arcadia named Pirgaki, which was the original home of its inhabitants. The cold winters of the past and a destructive landslide in 1870 forced the villagers, who were mainly shepherds, to move their herds further downhill and eventually they formed a permanent settlement in the milder area, naming it "Pirgiotika".

Today, there are about 278 inhabitants, mainly farmers, and the small-knit community has a school, several churches, a medical center and a typical village square, which is the heart of community life.

A walk around the pretty stone-built village offers a lovely amphitheatrical view of Nafplio below while the collection of five churches bears witness to the dedication of its inhabitants to their favorite saints. In addition, one can visit the Educational and Cultural Center, which is housed in the old primary school, where the customs and folklore of the village are well preserved.

St. John, St. Archangels, St. Nikolaos and Agia Paraskevi are all important to the villagers, with the main church being St. George, due to its namesake – the patron saint of their original village. Each year on the Feast of All Saints, the faithful gather and make supplications, as well as visiting the Arcadian village of Roino and the Church of St. George to pay their respects. During the feast of St. George, the townsfolk offer traditional sweets such as "diples" (fried batter in honey) and celebrate with music and dancing, while the village is also well known for its tradition of making delicious pies, pastries and local cheeses.

As you walk through the tiny streets, it is easy to understand how the old farming community decided to eventually settle there. Surrounded by lush greenery on a gentle slope, its location offers a mild climate and the elevation of 120 meters above sea level also means it offers a cool summer retreat. Each weekend, visitors from the surrounding areas descend on Pyrgiotika in order to taste the succulent roasts in its traditional taverns and to savor the magnificent views of the Argolis plain all the way down to the glistening sea below.