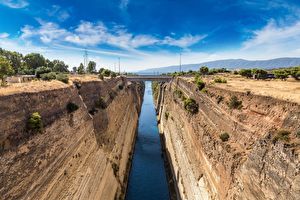 If you want to discover more about the area of the Argolis and explore some of its other towns on your way to Perivoli Country Hotel & Retreat, then a road trip may just be the answer!

Taking Athens as your starting point, from where you can easily rent a car, your journey will lead you out of the bustling metropolis and on to ancient cities, unique landmarks, traditional villages and ever-changing scenery.

First stop is Corinth, where the ancient Greek city-state dating back to the 8th century BC can still be found. Drive over the spectacular Corinth Canal, which separates the Peloponnese from the mainland and hug the coastline down towards your next stop, passing natural springs, secluded little beaches and tiny hamlets. Stop next at Epidavros, with its Ancient Theatre, a UNESCO World Heritage Site, and the archaeological remains of Asclepion, birthplace of modern medicine.

Head south to reach the graphic port of Ermioni, a popular celebrity getaway destination, and follow the sandy beaches of the sea road until you reach Porto Heli, an unassuming little coastal town known for its exclusive mansions hidden amongst thick pine forests. If you have time, park at the tiny harbour of Kosta and hop on one of the busy water taxis that carry visitors back and forth to the cosmopolitan island of Spetses just opposite.

Back on the road, drive north, cutting through the mainland via the picturesque terracotta-tiled town of Kranidi. Take the opportunity to visit the incredible twin caves of Didyma, both of which house little Byzantine chapels within. From there, follow the road that leads to the bay of Tolo, a popular tourist town, and then on to Asine, the ancient city of Argolis mentioned by Homer himself in the Iliad. The romantic, historical town of Nafplion is only a few kilometres away and by the time you arrive at Perivoli Country Hotel & Retreat, you will have already collected a treasure trove of memories before your vacation officially begins!