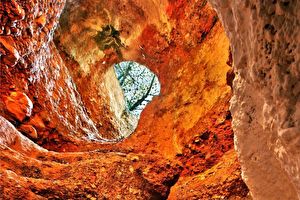 Argolis is one of those rare places with an abundance of breathtaking natural landscapes and fascinating geology at every turn. Its caves make for great hiking destinations; cool and shady during the summer, they can be perfect for escaping the dazzling sun. Some also take part in the area's vibrant history, so be prepared; there could be cultural discoveries in your day trip as well!

Start your journey at Didima, a tiny mountain village under an hour's drive from Perivoli Country Hotel & Retreat. From afar, the large crater which looms within the cliff face over this little settlement makes for quite an imposing sight. Although named "Megali Spilia" (Large Cave), it's actually considered to be a sinkhole, perfect for an exhilarating trekking session - just bring your hiking shoes!

Also near Didima, its smaller counterpart, "Mikri Spilia" (Small Cave), gains in significance where it lacks in size; visitors to this sinkhole quickly find that two Byzantine chapels have been built inside. The murals which were hand-painted on the walls of Agios Georgios in the 13th century are remarkably preserved, never failing to fill their viewers with awe. Metamorfosi Sotiros is also quite exceptional, since it was built into the surrounding rock; both of these places of worship are completely unique, but don't see many daily visitors, so this might be the perfect destination if you're on the lookout for an area free of tourists. Mikri Spilia also provided protection to the villagers of Didima during multiple attacks and invasion, including during World War II; this adds another layer to the sacred nature of this space.

The journey back in time continues; our next stop is near Porto Cheli, a charming little seaside town which is an hour away from Perivoli Country Hotel & Retreat by car. Franchthi Cave is one of those places in the world where humanity may have taken some of its first steps; ancient vestiges of prehistoric hunters have been found here, such as stone tools which date back as far as 28,000 BC. You can now walk through this cave which has witnessed our ancient beginnings, as wooden footpaths have been laid around its perimeter, along with information boards containing details about our earliest ancestors.

Every season is caving season here! Experience all aspects of these amazing destinations by exploring every nook and cranny next time you're in Argolis.