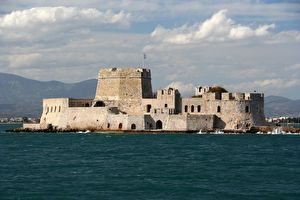 For thousands of years, the picturesque area of the Peloponnese known as Argolis has been very important to Greek culture, with a strong Venetian influence which can be seen to this day. Perivoli Country Hotel & Retreat's perfect location in the Peloponnese region near the city of Nafplio and village of Tolo provides an ideal starting point for embarking on a historical adventure. In nearby mountains and shores, plenty of majestic castles were built in medieval times by this former maritime republic of Italy; but how did this come to be?

Nafplio acted as a port for Mycenae; thousands of years later it was taken over by the Byzantines and then the Venetians, who greatly influenced its architecture: stone structures with terra-cotta roofs, narrow uphill cobblestoned streets and colorful facades draw travelers in from miles away. It used to be a well-to-do merchant town and, due to the port's ideal location, as well as being the Venetian capital in the late 1600s to early 1700s, it held great power in the East. In fact, it had a population of about 30,000, which was considered quite large at the time.

The oldest of its three castles, Akronafplia, was built during the Bronze Age and fortified greatly by the Venetians, to protect Nafplio from pirates and invaders from the sea. It is definitely a must-see for visitors of the area, due to its fascinating architecture and scenic views of Arvanitia Beach and the Arcadia mountains, as well as a cactus forest, thick with delicious prickly pears. This is actually the "old town" of Nafplio and its walls used to hold the whole city. It lies on a peninsula and is separated from the town by a moat, although now accessible by lift as well, from Plateia Politikou Nosokomeiou in the west of the town. There are stone walls where the naturally steep part of the peninsula does not protect this medieval "acropolis", as well as buttresses and spaces for cannons.

Another scenic stronghold here is Bourtzi, built in 1473 by the Venetians. An elegant stone structure which rises out of the sea and is beautifully lit up at night, it lies 600 meters away from the shoreline of Nafplio and initially acted as a deterrent for pirates, but has fulfilled multiple roles since then. It has housed government members and was even a hotel and restaurant during the late 20th century. Today, it can be visited by boat for a small fee.

The "newest" fortress to be built in Nafplio is Palamidi, which is actually held inside the "old town" of Akronafplia and was constructed during the 1700s by the Venetians. Though it is regarded as a great feat of military architecture, it was successfully stormed by the Greeks during the revolution in 1822; now it is one of the city's most popular landmarks, to be reached by car or on foot. It's an impressive sight, with its imposing stone arches, built on a steep hill and overlooking the Argolic Gulf in a truly breathtaking panorama. Absolutely worth the uphill walk!